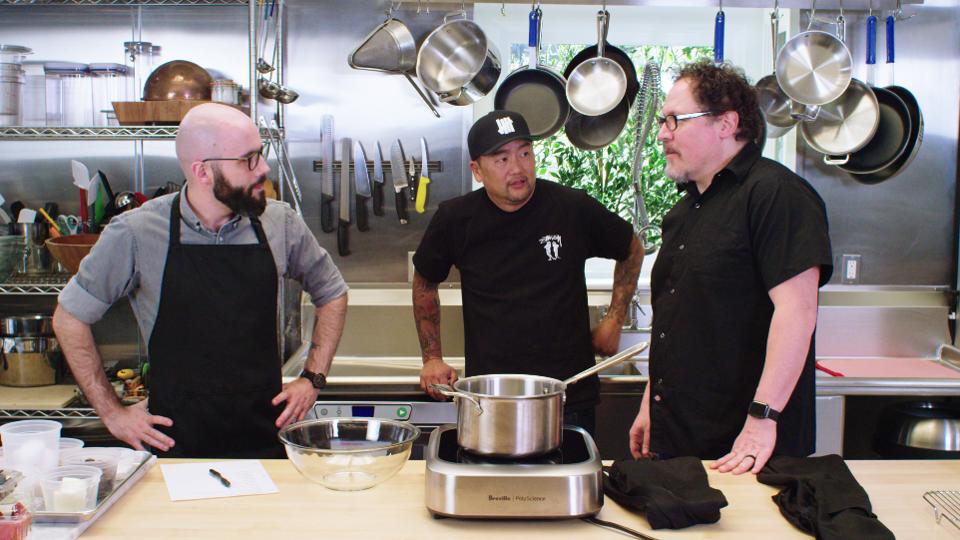 10 of the Best Food Shows on Netflix

There’s nothing as binge-worthy as a good cooking show—from the thrill of a cooking competition to the cultural adventures of a food traveler, TV and food shows go together like fish and chips. It’s no surprise that on-demand streaming services like Netflix have a large, diverse selection of them on their menu. If you’re looking for food shows on Netflix right now, here is a list you’re sure to enjoy:

Chef Roy Choi and Jon Favreau give you a chance to cook with celebrity A-listers and popular chefs in this charming travelogue. But The Chef Show isn’t good entertainment only because it brings stardom to Netflix food shows. The two hosts also experiment in the kitchen while exploring the nation’s best restaurants.

What’s even more interesting is that Chef Choi and Favreau first worked together on the 2014 film Chef and decided to reunite for the show.

Learn all about the ingredients, dishes, and culinary traditions of the Chaoshan region in China through this documentary.

Each episode of season 1 is a short and sweet Chaoshan food tour that focuses on a specific food. It depicts a flavorful journey, starting from the introduction and history of the dish, followed by its different preparation techniques and portrayals. Learn all you can about dishes like marinated crab, seaweed, and noodles in just 12 minutes. It’s one of the best food shows on Netflix for viewers with a short attention span.

This show gives viewers intimate access to the kitchens and lives of world-renowned chefs, offering a once-in-a-lifetime chance to peek behind the apron of one chef per episode.

Every episode of this Emmy-nominated series is beautifully shot, right on-brand for a probe on gourmet food and the Michelin stars that come with it. It’s a top choice for culinary shows on Netflix that indulge the would-be food snob in all of us.

An oldie but a goldie, this competition show has aired since 2010 and going by its popularity, is not about to stop anytime soon. It’s one of the best food shows on Netflix for baking enthusiasts.

A group of amateur bakers compete against each other in a series of rounds, with one being eliminated at the end of every episode. Though the bakers are put through the wringer with a variety of challenges, they go out of their way to create elaborate products with genial zeal. It’s undoubtedly a feel-good show.

Another baking show for the amateurs, only this time the contestants are by no means skilled home bakers or even or even enthusiasts. This is one of the best food shows to watch on Netflix for a good laugh. It’s pure comedic gold as the contestants make an absolute mess in the kitchen in an earnest attempt to recreate each challenge’s ideal treat.

6. The Curious Creations of Christine McConnell

Sometimes the usual kitchen fare can get boring—that’s where this show comes in. McConnell puts an edgy spin on cooking with gothic, even gruesome, kitchen creations. It’s Halloween for every episode as she concocts all sorts of sweet treats. Fancy some spider kittens or eyeball chocolate chip cookies? You’ll be spell-bound through the whole 26 minutes.

One of the new cooking shows on Netflix in 2020, this food documentary series explores cities’ culture and history through food. Every episode gives a compelling picture of the lives and crafts of street food chefs and vendors. The first season focused on Asia, the ultimate street food hub, taking viewers on a food adventure through the cities of Thailand, Indonesia, and South Korea.

Chef and food writer Samin Nosrat takes viewers along on her food travels all over the world. Her enthusiasm for every new adventure is infectious, and after a few episodes it will feel like you are watching a close friend speak to and cook with chefs, farmers, and other food producers. Every episode explores good cooking through the fundamentals and will leave you inspired to get into the kitchen.

Watch a heart-warming production of two families battling it out to win the title of best home cooks. Like The Great British Bake Off, this show makes our list of best food shows on Netflix for its camaraderie and engaging events. It’s a lot of fun to watch as families muster up impressive teamwork skills to create delicious-looking dishes.

How did pizza become popular in Tokyo? Chef David Yang investigates how foods migrate, change, and endure, by taking a deep dive to find the roots of beloved dishes. He brings fellow chefs and celebrities along on his explorations, providing both entertainment and education is each episode.

If watching these shows brings out the aspiring chef in you but you don’t have any food shows that you can take part in, Cocusocial has just the solution. Our cooking classes near you offer a variety of cuisines, each with professional instruction and an audience of fellow learners. It will be like taking a trip to the other side of the world from your countertop. Sign up today and learn to cook like a pro!